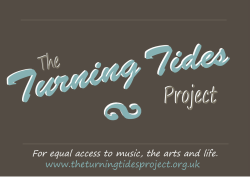 #Inclusive After School Music Sessions
The first pilot session for Jam Buddies was on the 3rd February 2016, in Okehampton. But what about Crediton?

This then combined, and grew, into Jam Buddies: Crediton!

This project was supported by The National Foundation for Youth Music from April 2018 as part of our Equal Access to Music Programme, a group of Projects funded for 2 years by Youth Music
© 2014 - 2021 The Turning Tides Project Community Interest Company. Company Number: 9053146.
Click here to visit the copyright webpage